It’s hard to overstate just how much life for working people in the United States has changed since the novel coronavirus first reared its ugly head in January. At least 16 million people have lost their jobs, and millions more are teetering on the brink. But now that stay-at-home orders have been issued widely, and life in most major cities has ground to a halt, those lucky enough to have the option to stay home—or to have one at all—find some of their few remaining interactions with strangers come at the grocery store.

They may not get as much attention as health-care professionals or striking warehouse workers right now, but grocery store workers have been—and still are—on the front lines of this crisis. And as has become more and more apparent in recent days, just like their counterparts in hot zones like Italy before them, they are in mortal danger.

On Monday, a Trader Joe’s worker in Scarsdale, New York, died from COVID-19, marking the nationwide grocery chain’s first casualty. Following the worker’s death, the Scarsdale location was shuttered until Thursday. The company has suggested the worker’s “underlying health conditions” helped lead to their demise, and it is not clear if the worker contracted the illness on the job—nor whether other employees at the same store may have become sick.

What matters most to Trader Joe’s workers right now, however, is simple. An employee is dead, and despite their company’s reputation as a bright spot in an often cruel economy, workers fear they may not be the last among them.

“My immediate reaction is ‘Holy shit!’. It feels a bit surreal but tragically predictable,” one longtime Chicago-based worker told The Daily Beast.

This week, I spoke with nearly a dozen Trader Joe’s workers from all over the country. They painted a picture of an outwardly progressive workplace that has betrayed its core values and failed its workforce. Behind the all cheery decor and novelty baked goods, the workers who keep the shelves stocked and cash registers ringing are suffering, they said. As they described it, a climate of fear and confusion reigns within their respective stores, along with an improving—but still sorely lacking—suite of protective measures and hazard benefits.

Of special concern was the company not putting workers at extra risk on leave ahead of time.

“They have the audacity to tell us the worker…. had pre-existing conditions, like that’s some sort of excuse?” one current Trader Joe’s worker told me via Twitter DM. “His death is because Trader Joe’s refused to take action when it became abundantly clear they needed to do something. [CEO] Dan Bane and the whole company has blood on their hands.”

With this dire news hanging over their heads, Trader Joe’s workers across the country are absolutely furious—and terrified. They have every right to be, too; as the virus spreads and grocery stores quickly become one of the only places where people can congregate, their chances of exposure will continue to skyrocket.

“What’s it going to take before the company realizes they can’t rely on empty platitudes?” the same worker asked. “Someone fucking died because Trader Joe’s won’t pay high-risk workers to stay home.”

In a statement to The Daily Beast, the company defended its handling of the pandemic and its employee practices in general. “We are deeply saddened that a Crew Member, who worked at our Scarsdale, NY store, passed due to complications from underlying health conditions that were exacerbated by COVID-19,” the statement read. “While the store is closed, Crew Members will be paid for their scheduled shifts, and as we know grief is different for every individual, we are also giving these Crew Members two additional paid days off to take when needed through the end of the month.”

“The health and safety of our Crew Members and customers remain our top priority,” the statement added, “and we will continue to take actions that meet and exceed health and safety recommendations to best safeguard their wellbeing.”

The company went on to argue it was hewing to all relevant guidelines, and said it was among the first in the field to implement social-distancing protocols. The company also insisted it had enacted aggressive sanitization policies, was providing masks and installing plexiglass shields at registers, had teed-up bonuses and a $2/hour boost in hazard pay, and also expanded paid leave, including for those who test positive for the virus or who are quarantined.

But workers couldn’t help suspecting there was no such thing as a progressive boss in a pandemic—or in general. If it’s a matter of asking people to risk their lives to dish out cauliflower gnocchi to panicked, potentially infectious suburbanites, or sending them home with full pay, there really is no grey area when such an already well-heeled company is raking in the kind of profits this one is.

“It hit home for a lot of people that weren’t taking this seriously before that [deceased worker] could be any one of us,” said a New York-based worker, who first heard about the Scarsdale worker’s death in a Facebook group called TJ’s Breakroom. “I honestly think the only reason Trader Joe’s has started to take safety issues seriously is the amount of bad press that they have received with their response to COVID-19. I hope the people at his store speak out and let their truth be known.”

Out on the floor, workers in many locations said that, at least as of earlier this week, they still didn’t have the supplies they needed despite the rapidly increasing number of infections and ensuing store closures. While the company’s official stance has reportedly been that “we don’t have a policy” on gloves, workers have previously described being told not to wear them so as not to upset customers.

Workers said recent gestures toward personal protective equipment (PPE) are still not enough, and that the company’s version of hazard pay amounts to a pittance. How much does a worker’s life cost? Apparently, they say, not all that much.

“Most of us work five days a week and some of us don’t have a washer or dryer in our apartments,” the New York worker told me. “What the fuck are we going to do with one mask? Cloth masks are also the least effective at filtering out the virus. So Trader Joe’s is giving us one of the worst kinds of masks to keep us safe? I’ve been gifted more masks by customers than I have the company I work for.” (The company said via email that it expected a second batch of masks to reach East Coast stores on Friday, and that the aim was for “each crew member to have at least two,” and perhaps provide staff with as many as four or five.)

Recently, several workers said, the company began offering up a viral video of a doctor at Weill Cornell Medical Center in Manhattan providing reassurance to those worried about the coronavirus’ spread. Two told me that links to the video, which was originally recorded in March, had also been added to stores’ employee portal; in one instance, it’s the only COVID19-related item posted, a worker said.

The New York worker said the video’s being disseminated felt “especially insane given that it was in NY that our fellow crew member just passed away.”

On top of that, workers characterized the company’s response to a nascent organizing effort as straight-up union-busting. Like many others in the grocery industry, the company has a history of resisting employees’ efforts to unionize, and it appears to be dusting off that old playbook—with a few ghoulish modern updates. “The other day, all crew members got this super insulting letter from Dan Bane,” the New York worker said. “One sentence thanking us, and the whole rest of the letter bashing unions. Trader Joe’s is more concerned about the threat of unions than it is with the safety of its own crew members.”

“They’d rather us die than lose a few days of sales,” a worker added. (The company has said it closes stores when faced with suspected cases of COVID-19 in consultation with health officials’ recommendations, that it sanitizes suspected infectious locations, and does preemptive cleaning.)

For now—and until the company sends high-risk workers home with full pay, implements extended shutdowns for locations where workers develop symptoms, or closes altogether—these essential workers will continue to clock in and mask up, hoping against hope that they won’t suffer the same fate as their coworker from Scarsdale.

“I wonder if the company is going to pay for his funeral,” one of them said as they processed the grim news, “or if Dan Bane will just send another letter saying, ‘Unions are bad and thanks for your heroic efforts.’”

Read more at The Daily Beast.

Got a tip? Send it to The Daily Beast here

Get our top stories in your inbox every day. Sign up now!

Daily Beast Membership: Beast Inside goes deeper on the stories that matter to you. Learn more.

Sun Mar 22 , 2020
Get ready for your heart to explode watching The Rock in his bath towel teaching his daughter to wash her hands to a Moana tune As the world shelters in place and coronavirus continues its spread, we’re all home with our kids and just trying to make it day by […] 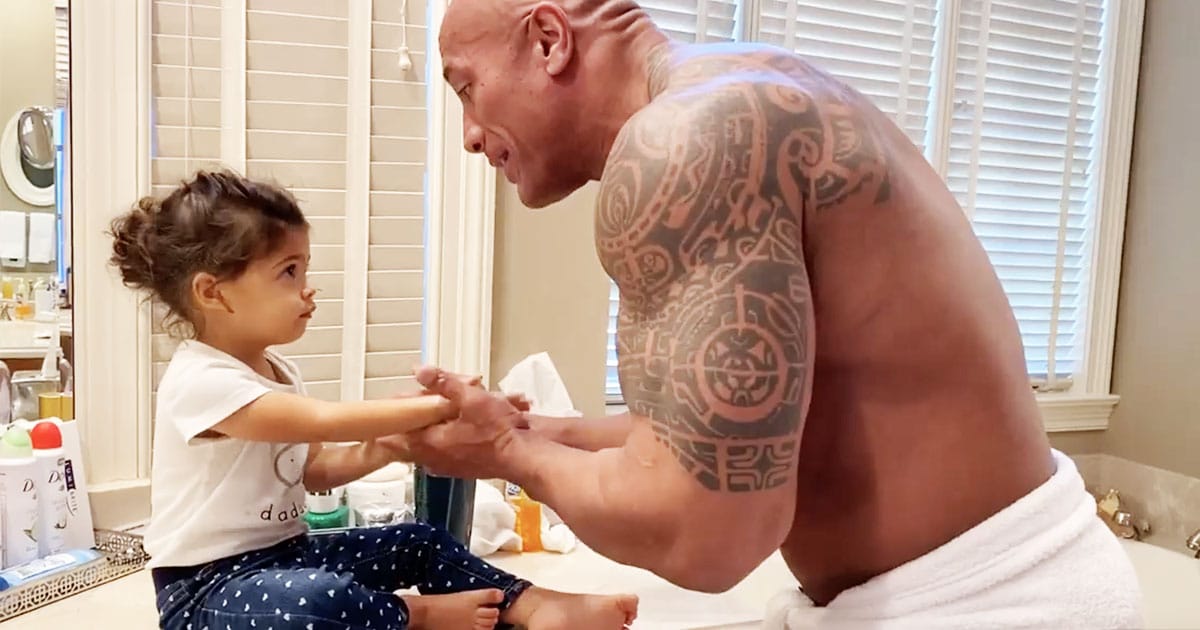