The “stay-at-home” orders enacted across the U.S. in recent weeks to slow the spread of the coronavirus have taken away Americans’ abilities to do many things. But one new pastime they’ve given us is analyzing the home decor of late-night hosts now broadcasting their shows from their respective homes.

TheWrap had HGTV “Extreme Makeover: Home Edition” designer Breegan Jane critique the broadcasted homes of Stephen Colbert, James Corden, Trevor Noah, Jimmy Fallon, Seth Meyers, Jimmy Kimmel and Conan O’Brien. She was impressed by a few — and not so much by others. Jane preferred the spaces that have clearly been “dressed” for TV.

Also Read: Alec Baldwin Asks Which ‘Tonight Show: At Home Edition’ Guest Has Been ‘Most at Their Wits’ End’ (Video)

Stephen Colbert
Office: “There’s this beautiful warm wood credenza that’s this gorgeous piece. But then with the flat screen and the shiplap on the walls– each thing is not offensive, but when it’s together it just doesn’t look cohesive or like anyone’s taken that extra layer to really say, ‘What is this room?’ You know, if it’s a gentleman’s library, I would say lean into that gorgeous piece that you have there and let’s give this whole room like a theater, speakeasy vibe. And that can be easily achievable.”

Patio: “The open pattern and the gray with the latticework on the white house — that’s beautiful, classic architecture that should feel warm and inviting, [but] he’s thrown like these bistro chairs in it.” Jane said she prefers to see “upholstered chairs and fabrics” to warm up his fire pit area.

Garage: “His garage to me is super-organized and is a dream garage. It’s got tons of space and you see the car. … But I’m like, why beige? Why the rental beige on the walls? You’ve got these cool concrete floors, you’ve got these cool beams that you’ve highlighted in a modern way — and then beige is just– there’s nothing modern about that color tone.”

Bathrooms: “I do like that he’s going with the more updated shiplap, you can tell his hardware’s nice. Designers are always gonna look at those sort of things.”

“You can tell it’s a warm, luxurious bathroom, but then I look at the walls and I’m like, there’s just missed areas for art in this bathroom and his handles look too small and dinky for how beautiful his tub filler is. That’s a gorgeous bathroom. I just think people forget to do these little updates.”

Also Read: Colbert Figures Out How to Make Coronavirus Quarantine Feel Like a Vacation, Literally (Video)

James Corden
“You can tell he curated a corner. That gives a lot of depth to what we’re seeing because you’re not staring at a flat wall. … And then he’s curated the space in a way that tells me a little bit about his personality, even though I know the corner of his house probably doesn’t look that way all the time. The red telephone and the leather suitcases, I think it speaks to that gentleman’s British vibe that he possesses.”

Trevor Noah
“The decor behind him is one of my favorites in taste. I also just love the tonality of it. You can tell the piece behind him is really well-made based on the way the handles are, I like that he has an award there, I like the pop of the flowers, and then I’m like, ‘But are you at a folding table?’ The designer in me is just like ‘Throw a sheet over it! Anything!’”

Jimmy Fallon
Playroom:
“I love how Jimmy Fallon keeps filming in his kids’ playroom. One of the things that I enjoy about that is how whimsical the room is. It looks like it’s a fun place, which is obviously his personality. But it has a very masculine tone for someone with two daughters.”

“There’s so many beautiful pieces in there: He has that drum that’s sort of built into the wall, he has a gorgeous piano, you can even see the cabinetry…I don’t even know where this is from, but this fun black-and-red piece. But because there’s so many warm woods in this room, I feel like it looks very heavy. I would love to see him whitewash that and open it up and lean into the whimsy of each one of these pieces.”

Kitchen (or perhaps craft room?): “He’s got this yellow antique storage bin, but I think there is an art to purposefully curating antique pieces. Some of that means that you have to be more cohesive in the background elements. And so there’s like one where [his kids] very cutely wrote ‘The Tonight Show Starring Jimmy Fallon’ on a piece of paper and I can so relate as a parent. And individually, I love all the pieces I’m seeing, but I’m like, I just want to go in there and re-hang everything and paint the walls. Because it’s all perfect, but I just want to curate it.”

“Yeah, I think it’s like, Jimmy Fallon, do you live in a log cabin? Because I’m all about your room with the antique art and the theme of the birchwood wallpaper, but every single room kind of looks like you live in a cabin, you know?”

(Noah also thought Fallon was staying in a cabin and ragged on his fellow late-night host’s home decor.)

“He has some like great prints on couches that I commend him for, like, clients are not willing to go that bold. But then you can see there’s like another thing where he has a white couch and each pillow stands out and I think his house could use a lot more of that stylizing, where he’s got so many cool things going on, they’re getting lost.”

Seth Meyers
Hallway: “So in the hall, I love that he’s hung a large piece in the hallway on a white wall. I think that shows a level of sophistication. But that light piece, I just wish he would update the shade, or maybe even remove it to go into more of that romantic ironwork. And you can see peeking out to the right of them is like 1993 ironwork. It’s that classic yellowy wood with painted white spandrels and I’m like, ‘Oh, please just give me a can of paint!’ Because you can make that into that same personality of his lighted sconce by just giving it a dark personality. … That banister behind him is just screaming, ‘Paint me dark and make me cool and romantic.’”

Bookshelf area:
“In Meyers’ room, he has one with a bookshelf behind him and he made that funny comment about, ‘I was asked to get out of the hallway.’ … One of the easiest ways to make that background just a little bit more inviting is to color code all your books. Like, color-coordinating all of your books will suddenly make your entire bookshelf look so sophisticated.”

“It’s probably a well-made bookshelf that doesn’t need to go, doesn’t need to be ripped out — but he could paint it to match the wall below so it’s more in 2020 and less dated. Or if he wants to go with that natural warm wood, then maybe put thatched wallpaper below it so it really brings out the texture of the wood. … And so design sometimes isn’t about redoing everything. I think everything’s just being scrutinized and everyone has this moment to really look at the corners of their home and go, ‘What would make this bookshelf happier?’”

Unidentified corner: “I just think that works well. I know that’s not interior design as much as set design, but that’s a part of dressing your interiors. And like the lamp behind him, I just want to put it in that empty spot on the right of him. And I would love if he had a cool mug on the table. And nothing has changed, it’s just more curated.”

Jimmy Kimmel
Living room: “Oh, I love that people didn’t believe that was Kimmel’s house. … And it does present bizarre. I think his film quality is a little bit above some of the others and so it totally reads as a green screen. Look, I love a floral wallpaper, I’m all about the feminine touches and I like that it’s framing in this outdoor area. But if that sort of seated area below it was a nice, deep green velvet or a blush pink velvet, it would make that wallpaper work.”

Office: “His office kills me, just because I’m like, ‘I just want to re-hang your pictures.’ Between the grain on his door, the wood behind him and then these pictures haphazard, I just want to help you re-hang a few pictures and you’d go leaps and bounds. … Obviously they are all very comfortable in their homes, but yes, as a designer I’m like, ‘Let me help you please!’”

Conan O’Brien
Patio: “I think his table is great and I love that outdoor with the shiplap. I think it is beautiful. But I wanted to take his wooden artwork above the fireplace and replace it with something like a beautiful mirror that would show off the grass that we can see in the reflection of the window.”

Office: “I really enjoyed that he used the molding to frame in those pieces. So with everybody else, I was going nuts over how they framed things. I love that he actually used the moldings to frame in that guitar and to frame in the other frame. But … you couldn’t have just moved that little green handle out of the frame? OK, alright, alright. I just want to be there with him to help him set dress it.”

“I want to commend them all for showing up their homes. Because it’s very vulnerable and I understand that vulnerability as an interior designer because my home is more judged than anybody’s. … A home is so much more than a perfectly curated art piece. … So I wanna say thank you for showing up, that you’re real humans and I like that layer of it and I enjoyed that.”

The HGTV “Extreme Makeover: Home Edition” reboot wraps up its season on Sunday at 8/7c. The season finale episode serves LAPD veteran Deon Joseph, his wife Tosha and their three sons. Jane and the crew refresh their Carson home into a “spa-like retreat.”

Wed Apr 15 , 2020
Photo: JunkerVals Antiques & Vintage/Yelp Shopping for antiques? Hoodline crunched the numbers to find the most noteworthy antique destinations in Fort Worth, using both Yelp data and our own secret sauce to produce a ranked list of where to venture next time you’re in the market for vintage goods. Fort […] 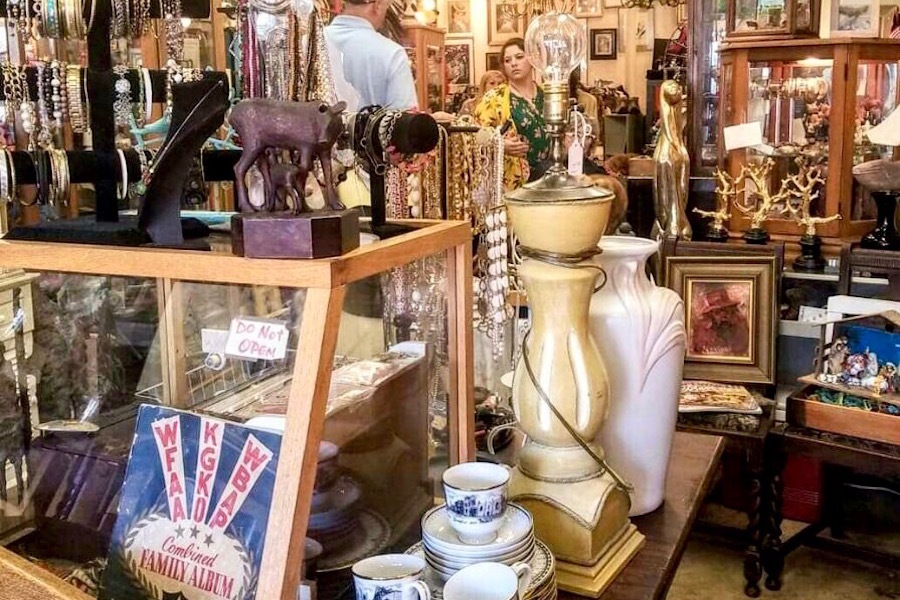